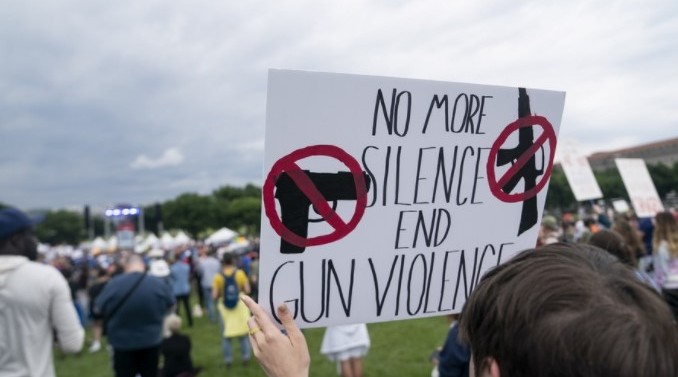 Following back-to-back mass shootings in which more than 30 people-including 19 children-were killed in Buffalo, New York, and Uvalde, Texas, US lawmakers moved quickly to pass a gun-control measure that President Joe Biden signed into law on Saturday.

Biden acknowledged that the bill fell short of the sweeping measures he had pushed for, but he said it included some long-sought priorities. He had called on Congress to ban assault weapons and high-capacity magazines and repeal immunity protection for gun manufacturers. None of those measures are in the bill.

The Bipartisan Safer Communities Act is the first gun-control measure passed by Congress in almost 30 years. It gained support from 15 Republicans in the Senate and 14 in the House of Representatives.

For those wanting stricter gun controls, the newly enacted law is one step in the right direction but not enough to curb gun violence.

“It’s better than nothing, but I don’t think the measures are enough to prevent mass shootings from happening,” said Brian Chu, an engineer and father in Houston, Texas. To Chu, a large-capacity magazine and assault weapons such as an AR15 are the prime factors contributing to mass shootings.

“If a perpetrator can only fire five or 10 shots consecutively at most, the casualties will be greatly reduced. They might be less emboldened to open fire in the first place with less deadly force in hand,” he said.

The US has more guns than any other country, and that number continues to grow, mainly because of its Constitution that protects the right to keep and bear arms and lobbying from groups advocating gun owners’ rights. The last time Congress approved a gun measure was in 1994 when it banned assault weapons for 10 years.

The new legislation aims to prevent dangerous people from buying guns and provides mental health services to communities. It enhances federal background checks for gun buyers aged under 21, allowing up to 10 days for examination of juvenile and mental health records.

The law prohibits domestic abusers from being able to buy a firearm if they are in a serious dating relationship, closing what has become known as the “boyfriend loophole”.

The legislation gives incentives to the states to enact and carry out red flag laws that allow judges to temporarily seize firearms from people deemed dangerous.

Mental health is the focus of the legislation, and $11 billion is budgeted to fund services. In total, it comes at a price of $15 billion for the next 10 years.

After its passing, the National Rifle Association said in a statement that “these measures were hastily jammed through with ambiguous language and overbroad definitions to appease gun control supporters in Congress”.

The legislation comes as a blow to die-hard gun rights advocates, many of whom worry that the so-called red flag law and domestic abuse clause will be misused to infringe upon gun owners’ rights.

Representative Tony Gonzales of San Antonio was the only House Republican from Texas to vote for the bill. Gonzales, whose district includes Uvalde, had twice voted against background checks for gun purchases.

With the US Supreme Court on Friday overturning a New York handgun law requiring people to prove that they have “proper cause” to carry a handgun in public, some ardent gun-rights supporters hope that the high court will eventually overturn this law.

There have been more than 21,000 deaths from gun violence and 281 mass shootings across the US this year, according to data from the Gun Violence Archive.

A 5-month-old girl was shot dead last week while in the rear of a car in a neighborhood on Chicago’s South Side.

Agencies and Xinhua contributed to this story.