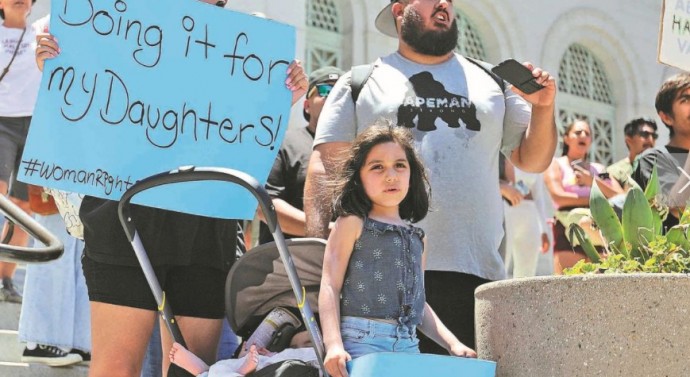 Demonstrators make their views heard at a rally in Los Angeles on Saturday, the second day of protests over a decision by the US Supreme Court to remove federal legal protection for abortions. XINHUA
Many fear reversal of court decision just the start of conservative offensive in US

Tens of thousands of demonstrators marched in cities across the United States on Saturday in a second day of protests over a decision by the Supreme Court to remove federal legal protection for abortions.

The protests were largely peaceful after the nation’s highest court voted 5-4 on Friday to overturn the five-decade-old Roe vs Wade ruling that provided women with a federal constitutional right to an abortion. But the passions driving the protests are unlikely to abate, especially in a year with crucial elections for Congress.

The ruling came more than a month after the leak of a draft opinion by Justice Samuel Alito indicating the court was prepared to overturn Roe vs Wade.

“The Constitution makes no reference to abortion, and no such right is implicitly protected by any constitutional provision,” Alito wrote.

Authority to regulate abortion rests with the political branches of government, not the courts, he wrote.

The immediate impact of the court’s ruling is that women with unwanted pregnancies in large swathes of the US now may face the choice of traveling to another state where the procedure remains legal and available, buying abortion pills online or having a potentially dangerous illegal abortion.

An already polarized country could face even greater social divisions as some states allow abortions and others have acted to ban them. And in a concurring opinion that raised concerns the justices might roll back other rights, conservative Justice Clarence Thomas urged the court to reconsider past rulings protecting the right to contraception.