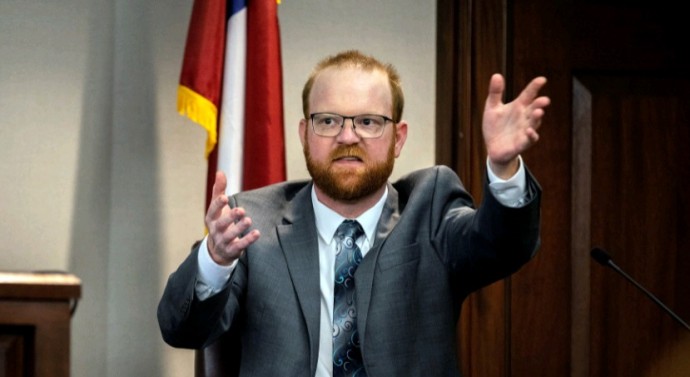 Travis McMichael sealed his fate when he took the stand in his own defense in the murder trial related to the death of Ahmaud Arbery, a 25-year-old Black man who was chased down and killed by three white men in what prosecutors called a “modern-day lynching,” legal experts said.

A nearly all-white jury convicted McMichael of malice murder, felony murder, aggravated assault, false imprisonment and criminal attempt to commit a felony. His father, Gregory McMichael, and their neighbor William “Roddie” Bryan were acquitted of the top charge and convicted of others, including felony murder.

The defendants had argued self-defense, as well as acting within their rights under Georgia’s citizen’s arrest law, which was legal at the time but changed after the shooting.

Once self-defense was claimed, the burden fell on prosecutors to disprove the defense’s argument beyond a reasonable doubt.

Rittenhouse’s defense attorneys argued that their client was the one facing danger after being threatened with a skateboard and chased down the street during his encounters with the men.

That argument and Rittenhouse’s own testimony, plus a grainy video played in the courtroom showing chaos in the streets, appeared to support his claim of self-defense.

That wasn’t the case during the trial over Arbery’s killing.

On the stand last week, Travis McMichael shared his version of what happened on Feb. 23, 2020, when the McMichaels and Bryan chased Arbery in their trucks after they spotted him in their neighborhood outside Brunswick, Georgia.

Travis McMichael shot Arbery with a shotgun at close range. Bryan filmed the fatal encounter on his cellphone. Video evidence appeared to support the prosecution’s narrative that it was Arbery, not the defendants, who was running for his life and then fought back in his final moments.

“While we can celebrate that justice was done here, if there hadn’t been a video, these men probably would have gotten away with it,” said former federal prosecutor Cynthia Alksne, a legal analyst for MSNBC. “I don’t think without this video we’d have a conviction.”

Travis McMichael said that on the day of the shooting, he was trying to get his young son to take a nap when his father came into the house “in an almost frantic state” and said the person they believed was responsible for crimes in the neighborhood had just run by.

Travis McMichael said he grabbed his shotgun and got into the driver’s side of his truck. Gregory McMichael was in the passenger seat. The two men drove in the direction they believed Arbery had run and eventually caught up with him.

Travis McMichael’s testimony was a “train wreck for him,” Kirschner added. “He should have been convicted.”