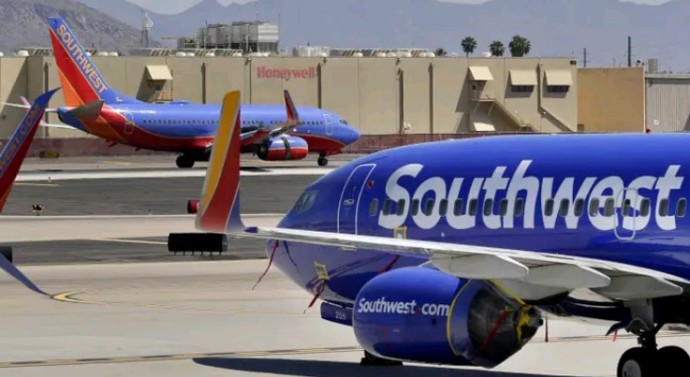 Conservative figures and politicians opposing vaccine and mask mandates have blamed more than 2,000 recent flight cancellations by Southwest Airlines on vaccine mandates, but both the airline and pilots union have said the massive number of flight disruptions had nothing to do with it.

That didn’t stop some politicians, like former president Donald Trump, Sen. Ted Cruz of Texas, and Rep. Andy Biggs from Arizona, from trying to link the cancellations to federal vaccine mandates even though they offered no evidence of it.

“The weekend challenges were not a result of Southwest Employee demonstrations, as some are reporting,” a spokesperson with the airline told BuzzFeed News.

False rumors online suggested the cancellations may have been linked to pilots walking off the job or calling in sick to protest mandatory vaccinations for COVID-19, which the company is requiring all employees to get by Dec. 8. The company requirement comes after President Joe Biden in September issued a mandate for COVID vaccines for federal employees, federal contractors, and companies with more than 100 employees.

But the Southwest Airlines Pilots Association, which represents nearly 10,000 pilots, pushed back repeatedly against reports that pilots protesting the vaccine mandate were behind the massive number of cancellations.

“I can say with certainty that there are no work slowdowns or sickouts either related to the recent mandatory vaccine mandate or otherwise,” the union said in a statement Sunday. “SWAPA has not authorized, and will not condone, any job action.”

Despite the statements from both the company and pilots association, Rep. Andy Biggs on Monday morning tweeted out a statement offering solidarity with “Southwest Airlines employees who are fighting against these mandates.”

A spokesperson for Biggs did not immediately respond to BuzzFeed News questions on whether Biggs was referring to the Southwest flight cancellations, or if he had any evidence the cancellations were connected to the mandates.

Rep Andy Biggs
@RepAndyBiggsAZ
I stand with #Southwest Airlines employees who are fighting against these mandates. This isn’t about a vaccine, this is about freedom.

When the reporter who wrote the story asked the senator where he had heard that the cancellations were related to vaccines, Cruz suggested it was from the author’s article and included a short snippet of the article referring to the vaccines.

Leslie Josephs
@lesliejosephs
@tedcruz Hi, Senator. I wrote that article. Where did you hear that there is a shortage due to the vaccine mandate?

Ted Cruz
@tedcruz
@lesliejosephs because I read your article…. “All of these challenges have led to an added distraction in the cockpit,” it said. “This week’s COVID-19 vaccine mandate announcement by the Company only exacerbates the situation.”

Twitter: @tedcruz
However, the senator appeared to ignore the bulk of the article, which cited Southwest Airlines blaming air traffic control issues and bad weather for many of the cancellations. The article also discussed at length personnel shortages, pilot fatigue, and disruptions that the company has faced.

The quote noted by Cruz about mandates referred to a union post on fatigue and disruptions faced by the pilots and that vaccine mandates “exacerbates the situation.”

Cruz’s office did not immediately respond to requests for comment.

Appearing on the conservative Howie Carr Show, Trump also cited Southwest Airlines when suggesting the economy would suffer over vaccine mandates. He suggested the hundreds of canceled flights were in protest of not just vaccine mandates, but of the election results of the 2020 presidential election that he lost and continues to falsely claim was “rigged.”

“Southwest Teams have been working diligently to restore the stability to the network, and we are experiencing less disruptions on Monday,” the statement reads.

NBC reported Southwest Airlines President Mike Van de Ven told staff Sunday that the airline was short-staffed and would considering cutting flight schedules in the fall to avoid delays and cancellations in the future.

Pilots and flight attendants have complained about being exhausted as the airline has ramped up flights after the pandemic.

The pilots union has said it is not anti-vaccination but has sued the airline arguing it has taken unilateral actions to impose the mandate and threaten termination of pilots who refuse to comply.

But the union blamed Southwest Airlines’ operation for falling under pressure, even though other airlines did not face disruptions to the same scale during the weekend.

But what caused just a few disruptions, delays, and cancellations with some of the major airlines “cascaded” to hundreds of cancellations for Southwest Airlines throughout the weekend, the airline said.

The union blasted the airline for buckling under the disruptions, pointing out other airlines weren’t as impacted by the troubles.

“Our operation and our frontline employees have endured continuous and unending disruptions since the first time our airline made headlines in early June due to widespread IT failures,” the union said, citing a June incident where a computer glitch forced more than 500 flights to be canceled. “Our pilots are tired and frustrated because our operation is running on empty due to a lack of support from the Company.”

Southwest Airlines on Monday apologized to customers affected by the disruptions.

“We hope to restore our full schedule as soon as possible,” the company said. “As a note, the operational challenges were not a result of Southwest Employee demonstrations.”