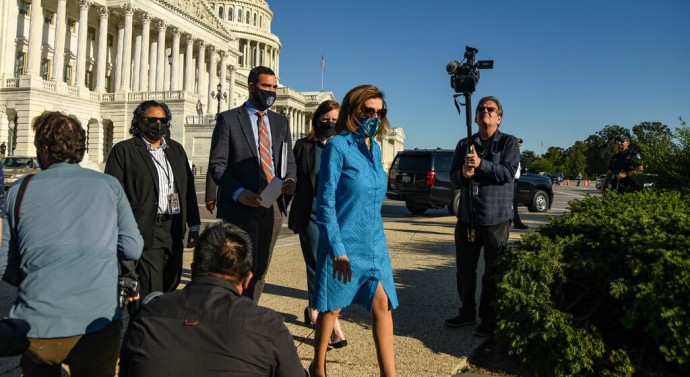 Speaker Nancy Pelosi of California said that the House would take up the $1 trillion bill on Thursday, hours before government funding is scheduled to lapse.

The vote will come hours before government funding — as well as key transportation programs addressed in the infrastructure bill — is scheduled to lapse on Oct. 1, leaving lawmakers with a narrow margin for error.

Ms. Pelosi had committed last month to holding a vote on the legislation by Monday, after a group of centrist Democrats threatened to vote against a budget blueprint needed to push through the party’s signature $3.5 trillion social policy and climate change bill unless they were promised a quick vote on the infrastructure measure, which the Senate passed last month.

But progressive lawmakers have vowed not to support the infrastructure bill until Congress acts on the $3.5 trillion plan to provide vast new investments in education, health, child care, paid leave and climate programs. That package has yet to be completed.

Continue reading the main story
Ms. Pelosi’s announcement that the House would aim to pass the infrastructure bill later in the week reflected the difficulty of the task that Democratic leaders face as they feverishly try to knit together a compromise to move forward with Mr. Biden’s agenda.

“I’m never bringing a bill to the floor that doesn’t have the votes,” Ms. Pelosi said of the infrastructure bill on “This Week” on ABC on Sunday.

Mr. Biden and members of his cabinet huddled with lawmakers over the weekend in a bid to push the two bills over the finish line, according to a White House official familiar with the discussions.

With a razor-thin majority, Ms. Pelosi can lose only three votes for the social policy plan, and Senate Democrats hope to push it through using the fast-track budget process known as reconciliation to shield it from a filibuster. House Republicans have urged their members to oppose the $1 trillion infrastructure package, so more than a few defections can sink that bill.

Representative Pramila Jayapal, Democrat of Washington and the chairwoman of the Congressional Progressive Caucus, pledged again on Sunday that liberal lawmakers would not support the infrastructure bill unless it was accompanied by action on the $3.5 trillion plan.

‘Our Differences in Age and Skin Color Meant Nothing to Us.’

Behind the Trees, a Brooklyn Artists’ Collective

The Ecstasy of Scientific Discovery, and Its Agonizing Price
Continue reading the main story

“The speaker is an incredibly good vote counter, and she knows exactly where her caucus stands, and we’ve been really clear on that,” Ms. Jayapal said on CNN’s “State of the Union” on Sunday. “The votes aren’t there.”

But Representative Josh Gottheimer, Democrat of New Jersey and one of the lead centrists in the House negotiating with Ms. Pelosi, suggested that progressives had issued an empty threat.

“It’s a key part of the president’s agenda,” Mr. Gottheimer said on “State of the Union.” “I just don’t buy at the end of the day that folks will vote against it.”

In the Senate on Monday, Democrats will also take up consideration of an emergency spending package needed to avert a government shutdown. Republicans, objecting because it contains legislation that would lift the limit on the federal government’s ability to borrow, are expected to block the measure in a procedural vote. The bill passed the House with only Democratic votes.