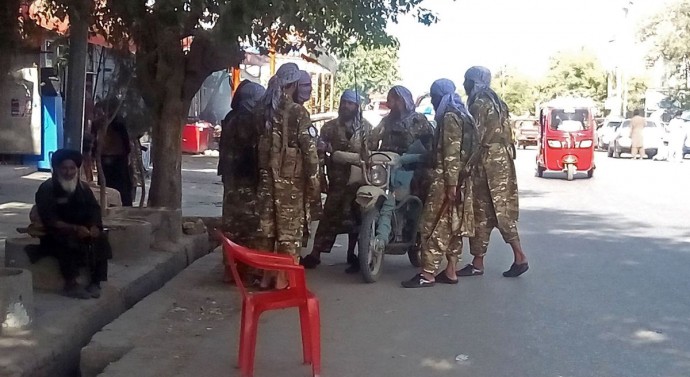 KABUL－Afghan government forces battled Taliban fighters in and around several cities on Thursday, with the insurgents encouraged by their capture of the strategic city of Ghazni just 150 kilometers from Kabul, media reported.

The city－the 10th provincial capital to fall to the Taliban in a week－lies along the major Kabul-Kandahar highway, effectively serving as a gateway between the capital and militant strongholds in the south.

“The Taliban took control of the key areas of the city－the governor’s office, the police headquarters and the prison,” said Nasir Ahmad Faqiri, head of the provincial council.

He added that fighting was continuing in parts of the city but that the provincial capital was largely in the insurgents’ hands.

The Taliban also confirmed they had captured the city, according to a statement posted by the insurgency’s spokesman on social media.

In the United States, ahead of the completion of the military withdrawal on Aug 31, some officials privately expressed concerns over the Taliban’s gains in the absence of Western troops for the first time since the 2001 invasion.

A defense official on Wednesday cited intelligence as saying the Taliban could isolate Kabul in 30 days and possibly take it over within 90, following their recent rapid gains.

“But this is not a foregone conclusion,” the official said, speaking to Reuters on condition of anonymity, adding that the Afghan security forces could reverse the momentum by putting up more resistance.

The Afghan conflict has escalated dramatically since May, when Western forces began the final stage of a troop withdrawal.

The loss of Ghazni will likely pile more pressure on the country’s air force, needed to bolster Afghanistan’s scattered security forces who have increasingly been cut off from reinforcements by road.

In less than a week, the insurgents have seized 10 provincial capitals and have now encircled the biggest city in the north, the traditional anti-Taliban bastion of Mazar-i-Sharif.

Fighting was also raging in Kandahar and Lashkar Gah－pro-Taliban heartlands in the south－as well as Herat in the west.

Desperate to stem the Taliban’s advance, Afghan President Ashraf Ghani flew to Mazar-i-Sharif to rally local militias to the defense of the biggest city in the north as Taliban forces closed in.

All gateways to Kabul, which lies on a plain surrounded by mountains, were choked with civilians fleeing violence, said a Western security source, adding that there was a risk Taliban fighters could be among them.

The Taliban, who controlled most of Afghanistan from 1996 to 2001, when it was ousted for harboring al-Qaida chief Osama bin Laden after attacks on Sept 11, 2001, want to defeat the government and reimpose strict Islamic law.

On Thursday, German Foreign Minister Heiko Maas told broadcaster ZDF that Germany will not provide any financial support to Afghanistan if the Taliban take over power in the country and introduces Sharia law. “We provide 430 million euros ($505 million) every year. We will not give another cent if the Taliban takes over the country and introduces Sharia law,” he said.

Conflict in different parts of Afghanistan in the past week has driven tens of thousands of people from their homes, the United Nations said on Wednesday.

The world body said they are among the nearly 390,000 people displaced by hostilities this year, with a massive spike since May.

The UN said more than 1,000 civilians had been killed in the past month and the International Committee of the Red Cross said since Aug 1, more than 4,000 people had been treated for injuries at 15 health facilities. The Taliban denied targeting or killing civilians and called for an independent investigation.