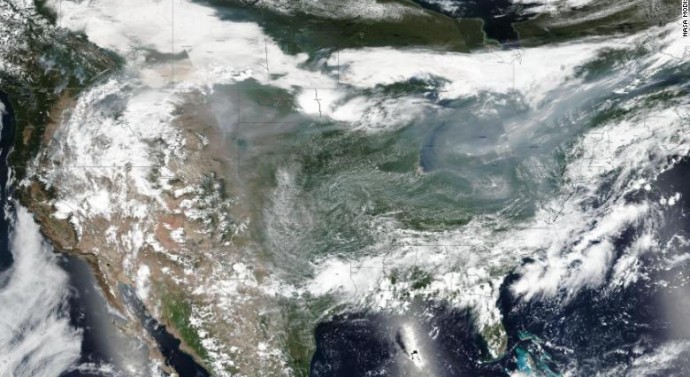 (CNN)The massive Bootleg Fire in Oregon has scorched an area larger than Los Angeles, and it’s only 30% contained. The fire is so large and is burning so hot that it’s creating its own weather.

It’s just one of the many blazes raging in the West; the National Interagency Fire Center is watching 80 large fires across 13 states this week — a testament to just how destructive the US wildfire season has become.
And the effects of the fires stretch all the way to the East Coast.
The Bootleg Fire in Oregon is so large, it's creating its own weather
The Bootleg Fire in Oregon is so large, it’s creating its own weather
Extraordinary plumes of wildfire smoke are billowing out of these massive complexes, reaching so far up into the atmosphere that they are being carried thousands of miles east by high-level winds.
While heavy smoke is making air quality hazardous in the West, it’s also creating eerie skies over the Midwest and Northeast.
All of the ingredients are in place for a exceptionally dangerous season — historic drought, extreme heat in early summer and a snow drought exacerbated by a dry winter and hot spring.
Eerie scenes in the East
Even as fog cleared Tuesday morning around the Great Lakes and along the East Coast, it was still hard to find sunshine as a thick blanket of wildfire haze hung in the sky.
“In areas where skies are ‘clear,’ thick smoke aloft is limiting sunshine, with no discernible sunrise visible at our office earlier this morning despite practically clear skies!” wrote the National Weather Service office in Albany, New York.
There were few clouds in the Northeast on Tuesday morning, but the smoke — carried on a 3,000-mile trip across the country — created a hazy start to the day.
In some areas, the smoke has reached the ground level, where it can be a health concern. Air quality alerts have been issued hundreds of miles from the flames, as far east as Pennsylvania and New York.
“Wildfire smoke should reach its peak concentration over Pennsylvania on Tuesday afternoon and some near surface smoke may also contribute to another day of hazy conditions” the National Weather Service in State College, Pennsylvania, predicted.