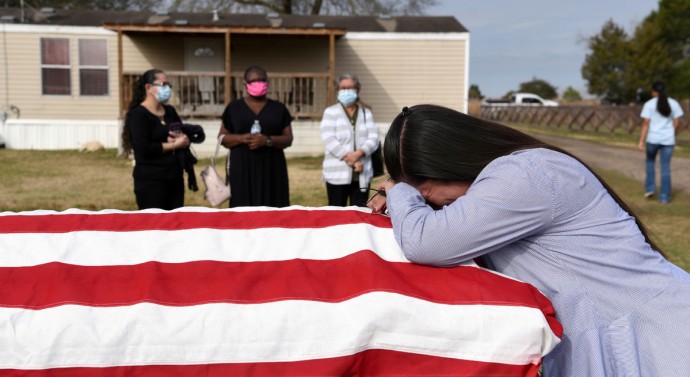 Lila Blanks holds the casket of her husband, Gregory Blanks, 50, who died of the coronavirus disease (COVID-19), ahead of his funeral in San Felipe, Texas, US, Jan 26, 2021. [Photo/Agencies]
United States hits No 1 after metrics change; ‘lockdown severity’ weighs against others

Bloomberg’s latest “COVID Resilience Ranking”, which scored the United States highest in the world for its return to normal life amid the pandemic, has generated controversy.

While Bloomberg put the US－which has recorded the most COVID-19 deaths in the world－at No 1 on its latest ranking of the world’s 53 largest economies, China was ranked eighth, Australia seventh and Japan 23rd－although those three nations have often been praised for their COVID-19 measures.

Bloomberg started the resilience ranking, which is updated monthly, in November. However, for the list released in June, it changed the ranking’s metrics to “accommodate the shift in COVID-19 management”.

Under the new metrics, the US topped the list, while in the May report, it had been No 13.

For some, the changing metrics called into question whether it was done to make the US No 1.

“They are playing with numbers to try to tell stories that they want to tell,” said Aaron Mitchell, a New York City resident.

The US still led the world in COVID-19 cases and deaths in June. According to data from the US Centers for Disease Control and Prevention, 300 people on average died each day in the US in June.

According to Bloomberg, a big drag on China was “lockdown severity”.

Bloomberg interpreted “lockdown severity”, a sign that a government is acting aggressively to control the virus, as a negative indicator for its ranking, because “social and economic activity are tightly restricted by government policy”, resulting in “greater disruption to lives”.

Alexej Jerschow, a professor of chemistry at New York University who has created an online dashboard comparing COVID-19 data from the US and other countries, said: “It’s not an easy question to answer if you’re saying we are going forward, how do we reopen the economy, how do we allow free motion, businesses, restaurants?… I don’t think there’s a simple answer, to just talk about lockdown severity.”

According to Bloomberg’s metrics, “lockdown in one city or area will be the basis” for the whole country’s performance, which means that although China was listed as one of the countries with the worst “lockdown severity”, the majority of China’s 1.4 billion people face hardly any limits on their movement.

Social media users who criticized the rankings used such descriptions as “joke”, “fake” and “shameless”.

“So no number for cases and deaths? What a joke,” said a Twitter user who goes by Dr. Z.

Another Twitter user, YC.kwok, wrote, “More than 0.6M deaths and the US is now the best place to be during the pandemic, congratulations.”

Yet another Twitter user, Nike Luoke, commented: “What lockdowns are there even in China? The whole country has been fully reopened for like a year.”

Meanwhile, a recent report said that “despite calls for solidarity, many countries have undermined the global fight against COVID-19 by acting in their own self-interest and failing to look after their most vulnerable citizens”, according to Bloomberg.

Unequal access to vaccines is the most evident example of the lack of global unity, according to the report from Chatham House, an international affairs think tank based in London. Rich countries cornered the market, hampering partnerships such as COVAX, the international initiative to provide vaccines to developing countries, the report’s authors said.

According to the World Health Organization, the US and other high-income countries have secured almost 90 percent of the available coronavirus vaccine supply, leaving poor countries struggling to acquire vaccine doses.