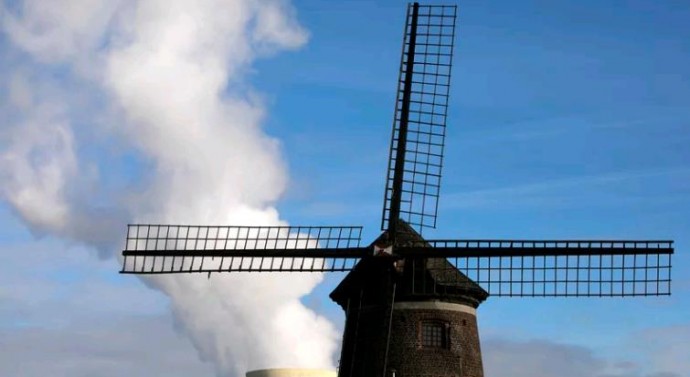 BRUSSELS — The European Union unveiled sweeping new legislation Wednesday to help meet its pledge to cut emissions of the gases that cause global warming by 55% over this decade, including a controversial plan to tax foreign companies for the pollution they cause.

The legislation presented by the EU’s executive branch, the European Commission, encompasses about a dozen major proposals, ranging from the de-facto phasing out of gasoline and diesel cars by 2035 to new levies on gases from heating buildings.

They involve a revamp of the bloc’s emissions trading program, under which companies pay for carbon dioxide they emit, and introduce taxes on shipping and aviation fuels for the first time.

Most of the proposals build on existing laws that were designed to meet the EU’s old goal of a 40% cut in greenhouse gas emissions by 2030 compared to 1990 levels — and must be endorsed by the 27 member countries and EU lawmakers.

World leaders agreed six years ago in Paris to work to keep global temperatures from increasing more than 2 degrees Celsius (3.6 degrees Fahrenheit), and ideally no more than 1.5 degrees C (2.7 F) by the end of the century. Scientists say both goals will be missed by a wide margin unless drastic steps are taken to reduce emissions.

“The principle is simple: emission of CO2 must have a price, a price on CO2 that incentivizes consumers, producers and innovators to choose the clean technologies, to go toward the clean and sustainable products,” European Commission President Ursula von der Leyen said.

The commission wants to exploit the public mood for change provoked by the COVID-19 pandemic. It’s already channeling more than one-third of a massive recovery package aimed at reviving European economies ravaged by coronavirus restrictions into climate-oriented goals.

The aim of the “Fit for 55” legislation, commission officials say, is to ween the continent off fossil fuels and take better care of the environment by policy design, rather than be forced into desperate measures at some future climatic tipping point, when it’s all but too late.

European Commission Executive Vice-President Frans Timmermans said that by failing to act now, “we would fail our children and grandchildren, who in my view, if we don’t fix this, will be fighting wars over water and food.”

Given the implications, the proposals are certain to be subject to intense lobbying from industry and environmental groups as they pass through the legislative process over at least the next year. They’ll also face resistance because of the very different energy mixes in member countries, ranging from coal-reliant Poland to nuclear-dependent France.

Germany’s environment minister, Svenja Schulze, said negotiations need to focus on maintaining the ambitious targets in a reliable way, be fair to the poor and ensure all of Europe “goes down this path together.”

“National solo efforts won’t lead to the goal,” she said. “There needs to be a coordinated, massive expansion of sun and wind power from the North Sea to the Mediterranean.”

Echoing the thoughts of some climate scientists, Oxfam EU head Evelien van Roemburg urged the member countries and lawmakers to be more ambitious than the European Commission.

“They must step up ambition by ensuring all EU climate rules contribute to carbon emission cuts of at least 65% in 2030, rather than the current 55%,” she said.

Among the legislation’s most controversial elements is a plan for a “Carbon Border Adjustment Mechanism.” It would impose duties on foreign companies and therefore increase the price of certain goods, notably steel, aluminum, concrete and fertilizer.

The aim is to ease pressure on European producers that cut emissions but struggle to compete with importers that don’t have the same environmental restrictions.

The question is how the EU — known for its staunch defense of open trade — will ensure that the carbon tax complies with World Trade Organization rules and not be considered a protectionist measure.

Another concern is the need to help those likely to be hit by rising energy prices. The commission is proposing the creation of a “social climate fund” worth several billion euros to help those who might be hardest hit.

“This fund will support income and it will support investments to tackle energy poverty and to cut bills for vulnerable households and small businesses,” von der Leyen said.

But Martha Myers, a member of the climate justice team at Friends of the Earth Europe, said the decision to extend emissions trading to buildings “throws low-income people into high energy price waters while offering only a swimming float of support to relieve energy poverty.”

Under Fit for 55, a drastic acceleration in sales of battery-powered cars also is likely as the EU aims for a 100% reduction in auto emissions.

Hildegard Mueller, president of the German Association of the Automobile Industry, said the industry supports the EU goal of reaching climate neutrality by 2050. But she said that goal can only be accomplished “if the consumers and companies can implement these goals.”

Mueller warned of a “substantial” impact on jobs at auto suppliers that would struggle with the pace of the changeover.