“Airlines are not usually very good at information technology,” says Pascal Buchner, the chief information officer of the International Air Transport Association (IATA) – the trade association for the world’s airlines.

Anyone who has had their baggage lost, or their flight delayed, would probably agree.

But airlines are betting they can improve the situation by making big investments in technology.

“We now know that data is the main source of performance for airlines,” says Mr Buchner.

From predictive maintenance, baggage handling and cargo tracking to staff management and customer loyalty programmes, data – and how all this information is analysed – has rapidly become one of the most important factors in determining how an airline operates successfully.

“During a single trip, a passenger may interact with up to 10 different entities – from airlines, government, ground handlers to at least two airports – all of which requires the secure exchange of data on baggage, flight and travel documents,” points out Jacques Demael, senior vice president of strategy and business support at SITA, an aviation-focused global IT firm headquartered in Geneva.

According to Mr Demael, the amount of data shared across the industry has “exploded” over the last few years.

While travellers may not be aware of it, a smooth trip is largely dependent on data, from sharing travel documentation to monitoring the flow of baggage between airports.

Checked baggage loaded into an airplane of the Rossiya Airlines at St Petersburg’s Pulkovo International Airport
IMAGE COPYRIGHTGETTY IMAGES
image captionRates of baggage mishandling have been cut in half over the last decade, according to SITA
“The ability to track your bag across multiple steps in the journey and share that information… significantly reduces the chance that your bag will he mishandled,” Mr Demael says, explaining that the use of baggage tracking data leads airlines to improvement rates of up to 66%. 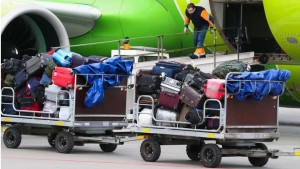 “These improvements have resulted in baggage mishandling rates globally being cut in half over the past decade.”

Despite the improvements, there is work still to do. A 2020 report from SITA found that in 2019, 25.4 million pieces of luggage were mishandled around the globe, costing the air transport industry approximately $2.5bn (£1.8bn; €2.1bn).

And with that recovery will come the collection of record amounts of data.